Is your career stuck? Look out for these 6 signs of the writing on the wall. 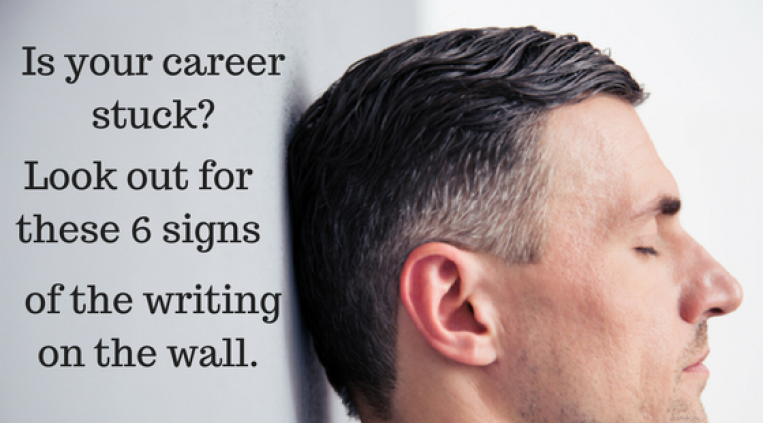 How many times have you felt that with just a little more time, a little more patience, a little more staying power, a little more improvement, you’ll get that promotion. But as time passes, there’s still no promotion in sight - and you begin to wonder what all of this perseverance is about and what might be the real factors affecting career development. Finally, without even noticing how you got there, you’ve arrived at Stuckdom.

Thousands of middle managers ask the same question, year after year: How could I have possibly known that I’d end up stuck? This post is focuses on this very important question. My hope is that for those of you slipping towards Stuckdom, I can help you turn things around, putting you on the path to promotion.

The writing on the wall

Situation 1: Not being considered for promotion

No doubt that not being considered for promotion can signal a preliminary warning that something’s up. But if you’ve experienced any of the situations below, it’s the writing on the wall.

1.    Your boss won’t obligate to any promotion now or in the future.

2.    You can’t get any information out of you boss regarding why you aren’t getting promoted. Instead, you’re told to wait patiently.

3.    You’ve already been rejected for promotion twice for the same reason.

Situation 2: Someone else has been promoted instead of you

Being passed over for promotion by either a co-worker or an outside hire should be seen as a warning. But here’s the writing on the wall:

1.    The co-worker is all around less qualified than you. And the rest of the company doesn’t seem to understand why the other person got the job instead of you.

2.    The outside hire has less relevant experience than you.

Your annual performance review is a good time to find out any plans for promotion your boss might have in store for you. During the review, some things are said on record, while others are said off record. Pay attention to the possible off record situations below - these are writing on the wall.

1.    Even though your boss knows you’re patiently waiting for a promotion, nothing is mentioned about it in your review.

2.    Even though you specifically ask about your chances for promotion, the answers you get are vague, such as “just give it some time” or “what’s the rush?”

You might feel as if you’re starting to be left out of things - getting less updates, being asked less for your opinion - which can serve as a warning. Here’s the writing on the wall:

1.    In the name of efficiency and time management, you’re asked not to attend meetings you’ve actively participated in until now.

2.    You’re not updated regarding some important developments and when you ask your boss about it, they act very surprised and say that it just couldn’t be. This will probably repeat itself in different formats.

When looking back on our career, we’ve all noticed some of these situations and have thought of them as out of place. The question is why we might not have identified them as writing on the wall. The answer is pretty clear; we simply chose not to. The hard part is that if we’d chosen to see the writing on the wall, we would’ve had to deal with it, which is really frightening. But the truth is that at the end of the day, we still have to face it anyway. So why not take action while you can - and avoid the slippery slope to Stuckdom?

Remember, the earlier you see the writing on the wall, the quicker you’ll be able to take action - and take charge of your own career.